In the evolutionary ‘Age of Dinosaurs’, man and dinosaurs did not coexist and were separated by millions of years. But if dinosaurs and humans were both created on Day 6, they clearly coexisted, and there should be evidence of that. Using hundreds of incredible photographs from around the world, Dire Dragonsprovides stunning evidence that the ancients saw dinosaurs and depicted them, calling them ‘dragons’. One of the best books on the subject ever produced. 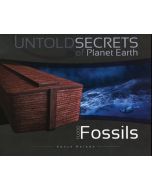